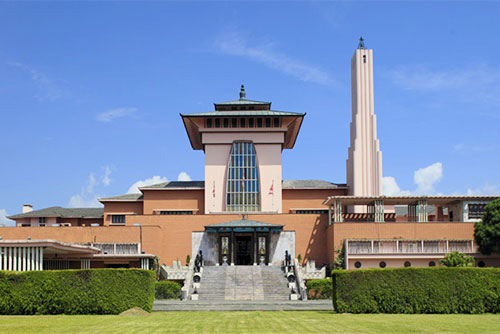 Narayanhiti Palace Museum is the former royal palace in the centre of the Nepalese capital, Kathmandu, It is the palace which long served as a primary residence for the country’s monarchs. The palace area covers (30 hectares (74 acres)) and is fully secured with gate controlled walls on all sides.

Full of chintzy meeting rooms and faded 1970s glamour, the palace interior is more gaudy than opulent. The highlights are the impressive throne and banquet halls and the modest royal bedrooms (check out the great armchair with built-in speakers). Stuffed gharial, tigers and rhino heads line the halls next to towering portraits of earlier Shahs and photos of the royal family taken with other doomed leaders – Yugoslavia’s Tito, Romania’s Ceaușescu and Pakistan’s Zia ul-Haq.

The locations where Prince Dipendra massacred his family in 2001 are rather morbidly marked, though the actual building was rather suspiciously levelled after the crime. Bullet holes are still visible on some of the walls. Just as interesting as the building are the locals’ reactions to it, as they peek at a regal lifestyle that for centuries they could only have dreamed about. Cameras and bags are not allowed inside the complex